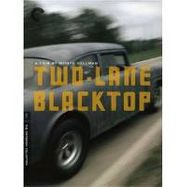 In one critical scene in Two-Lane Blacktop, Kris Kristofferson’s “Me and Bobby McGee” is heard in the background. Its famous refrain runs, “Freedom’s just another word for nothing left to lose.” Therein lies the core of Monte Hellman’s intimate, artfully photographed road movie about liberty, competition, friendship, and commitment.

Its archetypal characters bear no names. Two taciturn dragsters, the Driver (James Taylor) and the Mechanic (Dennis Wilson), scour the countryside in a scarred, souped-up ’55 Chevy. They pick up the Girl (Laurie Bird) on the road. Somewhere outside Los Angeles, they encounter an aimless yet aggressive nomad (Warren Oates) piloting a new canary-yellow muscle car, who challenges them to a race to Washington, D.C., with pink slips as the prize. They roll. Everything changes.

For this deceptively simple yet moving drama, director Monte Hellman – like Francis Ford Coppola and Martin Scorsese, a graduate of Roger Corman’s B-movie factory – cut across the country from L.A. to Memphis, shooting in sequence and improvising as he went. He drew understated, nuanced performances from singer-songwriter Taylor and Beach Boys drummer Wilson, who bring rock-star charisma to their roles, and first-time actress Bird. Oates equals his devastating work in Sam Peckinpah’s Bring Me the Head of Alfredo Garcia, delivering a motor-mouthing mix of braggadocio and vulnerability. And the Chevy and Pontiac G.T.O. attain personalities of their own as they rumble across the wide screen.

Two-Lane Blacktop was a flop in its day. Maybe people were expecting an action picture about drag racing. Instead they got an introspective meditation about failed seekers in an age of seeking. As a portrait of America in the dimming of the ‘60s, it’s as evocative and sharply framed as a Robert Frank photo of a slab of superhighway.