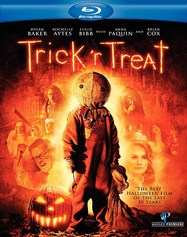 Trick 'r Treat might just be the greatest Halloween horror film to date. Not only do most of the horror films that people choose to scare themselves with around the holiday not even circulate around the event, but those that do, such as the films that make up the Halloween franchise, fail to approach the mysticism of Halloween itself. Don't get me wrong, many of them are awesome movies, but they use Halloween as a crutch instead of integrating it into the plot.

Aside from its thematic elements, this movie also has some of the most amazing art direction, makeup, and old-school prosthetics that are unfortunately lost or digitized in more contemporary horror and fantasy films. I'd compare it to Pan’s Labyrinth in the sense that it really compliments the film without taking away from anything else, and yet, it’s the film’s strongest feature. It features an ensemble cast of many lesser-known actors, including Dylan Baker (the pedophile from Happiness), Brett Kelly (the curly-haired kid from Bad Santa), and Anna Paquin (Almost Famous, X-Men). It also stars a lot of really talented children. The ensemble cast gives you no one to focus on, which lets you delve into the story and get into the spirit of spookiness. Another great aspect to it is the fact that the majority of the characters are all annoying, or outright horrible people, who you in turn anticipate seeing slaughtered: child murderers, irresponsible young adults, and bad-mannered children.

There's a key event that the entire movie more or less wraps around. On a Halloween generations prior, several children were greatly wronged by the very people they trusted the most. The children were all mentally challenged and/or disturbed and bussed to a school miles out of town. The point of them being bussed was to hide the shame of their parents. As a team, when the parents were exhausted with caring for them, they pooled together a bribe for the children’s bus driver. They asked him to drive to a quarry outside of town and get rid of them.

A few generations later, a group of children decide to scare a mentally challenged girl on their block by taking her to the quarry where the massacre happened and telling her the tale. Once there, they planned to separate from her and have her discover their mock-mutilated bodies. The plan is successful and the girl is scared out of her wits, but it also backfires when the actual spirits of the wronged children rise from their shallow graves and attack.

Earlier in the night the children went on a scavenger hunt collecting jack-o-lanterns from their neighbors. The movie then gives a little bit of history as the leader tells the others that lanterns are an offering to those who've died. Another claims that if lit, they'll protect you from evil. One of the people they visited was their teacher, Steven Jenkins (Dylan Baker). From a distance he seems like your average middle-aged man. He's a widower with a young son who takes the Halloween holiday way too seriously. A chubby little pupil who smashes pumpkins (an act of vandalism which Jenkins loathes), wanders onto his porch and eats a piece of candy from his teacher. But the treat was poisoned and kills the boy, and Jenkins carries his body to the backyard to dispose of it. However, he saves the head and intends to make a “pumpkin carving” with it alongside his innocent and oblivious son. It sounds sickening, but the scene was actually quite hilarious. While burying the body he exchanges a few passive-aggressive words with his neighbor, Mr. Kreeg (Brian Cox), from across the fence.

Kreeg is the equivalent to the Grinch when it comes to Halloween. He hates the holiday and even sics his dog on trick 'r treaters who knock on his door and warns unwanted prowlers about his loaded shotgun. He's mysteriously afraid of something, as illustrated through the six locks he has on his door. We don't find out his relevance to the plot until the very end.

Going back to Jenkins, killing children is not his only Halloween pastime. He also dresses up as a batman-like vampire and preys on unsuspecting ladies. One of these ladies seems unbearably sweet and virginal (Anna Paquin). She also seems terribly lonely. He closes in on her and she brings him to a gathering with her friends. As it turns out, she's a werewolf out for her first kill, and her sexy werewolf friends are there to help her initiate. This scene is one of the best in terms of prosthetics because when the girls become wolves they tear off their beautiful skin to reveal their inner beasts. It's a wonderful sequence as far as art direction goes. Lastly, but actually first in the film, is a young couple. The man is super excited about Halloween while the woman wants to be rid of the night as soon as possible. She's later punished for her “disrespect” to Halloween and its rituals.

Now, throughout the entire film there is a main attraction: a child-size would-be person in a scarecrow outfit with a perfectly round, pumpkin-shaped head. This person wanders around the neighborhood and watches people kill others or, in one way or another, shun the holiday. The little guy was also present in a field in which the school bus full of children drove past years ago. As it turns out, it’s sort of like the evil spirit of Halloween, similar to a Christmas spirit, and it has a few people it wants to pay a visit to. Of course, these visits are intended to be fatal. The little demon also offers the other rewarding makeup design perks of the film. It visits Mr. Kreeg's house, and again, we aren't sure why until the end. It begins to slowly attack, with witty objects such as a super-sharp lollypop, a chocolate bar with a razor, and hard candy made of sharp, spiky glass. When Kreeg fights back with his shotgun and hits it, splats of pumpkin guts come from it instead of blood. It doesn't sound thrilling, but it looks amazing.

The sharp attention to detail really made this film wonderful, but from what I've read, it went straight to DVD, and by “straight,” I mean it took years to get a release. I'll never understand why. Not only do you have an interesting plot that gives you a back story to many Halloween traditions, but the movie also pays homage to many other films and folklore, including Little Red Riding Hood, Batman/Dracula, The Addams Family, and probably others that I didn't notice. I did notice and find it ironic, or perhaps intended, that Baker's character in this film and Happiness both have a son named Billy that they expose to their disgusting lifestyle. Highly recommended.