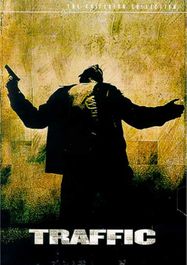 After his massive debut film Sex, Lies, and Videotape helped jump start the impressive independent film movement of the 1990s, director Steven Soderbergh had a rough go in the world of filmmaking. Though his follow-ups King of The Hill, Kafka, and The Underneath were all interesting, none lived up to the promise shown earlier. It wasn’t until the end of the decade that Soderbergh started to really find his stride with a pair of terrific crime thrillers, Out of Sight and The Limey. Often working as his own cinematographer his films developed a grainy, handheld look and an almost docudrama feel. In 2000 Soderbergh peaked critically with the solid drama Erin Brockovich and his two-and-a-half hour epic Traffic, a truly outstanding look at the drug trade in both the United States and Mexico.

A remake of the British TV mini-series Traffik, Soderbergh’s film follows the original very carefully, but expands on the political potholes faced by the politicians while changing the land of the traffickers from Pakistan to Mexico. It all adds up to a more complex tale. The film follows three stories taking place in Tijuana, San Diego, and Ohio. Each story is given a different look and color scheme—Ohio looks cold and blue, while Mexico is washed out and yellow. The film is giant with over a hundred speaking roles, and even includes actual politicians Barbara Boxer and Orrin Hatch playing themselves for added realism.


In Ohio, Judge Wakefield (Michael Douglas) is appointed by the White House to be America’s new Drug Czar, to help make a policy on taking on the drug trade. He begins to see what an unwinnable war he is facing. He questions Mexican officials as to what they are doing to stop the flow of drugs, but soon realizes that the flow can’t be stopped until the need is eradicated. At home he and his wife (Amy Irving) have to deal with the increasing drug problem of their teenage daughter (Erika Christensen). She goes from privileged straight A student and casual pot smoker to full on junkie whore in record speed (a sped up descent for the sake of film).

Cop Javier Rodriguez (Benicio Del Toro) may be the only uncorrupt man on Mexico’s side of the drug war—he and his partner are instructed by General Salazar (Tomas Milian) to capture a hit man (Clifton Collins Jr., Perry Smith in Capote) and to bring down his employers, the Obregon cartel. Javier sees some success but realizes that Salazar is actually just working for another drug cartel. It’s a vicious circle. He eventually joins up with the American DEA cops, giving them information in exchange for them building a kids baseball field in Tijuana.

Meanwhile the third story line set in San Diego features two drug cops (Don Cheadle, Luis Guzman) who bust a dealer (perennial creep Miguel Ferrer), which leads to the downfall of the big boss (Pacino’s Scarface sidekick Steven Bauer). His affluent, pregnant wife, Helena (Catherine Zeta-Jones) must now face life without her husband. She begins to learn more about his business and becomes just as ruthless in order to get him free. She hires that Mexican hit man (Collins Jr.) to knock off Ferrer so he can’t testify, while evading the cops who are watching her.

All these disjointed story lines eventually more-or-less intersect. The entire cast is outstanding and includes Albert Finney, Dennis Quaid, and most memorably, Topher Grace. But the heart of the film lies in Mexico with Del Toro (he deservingly won an Oscar for his performance). His sad sack and naive cop just wants to do the right thing but can’t make any headway. In the end he earns that baseball field (for the kids) but nothing more. As with real life you take one piece of the drug trade down and another pops up. Del Toro is such a unique actor; speaking most of his role in Spanish he is able to convey so much with just a look.  With his hound dog eyes the guy carries so much soulfulness. The highlight of his work since Traffic has been reteaming with Soderbergh on their humongous Che Guevara biopic, Che. His performances in both films prove he is one of the more interesting actors of recent decades.

Though Traffic won a bunch of Oscars and made plenty of ten best lists there was also an air of cynicism towards the film—some found it patronizing while others found it too obvious. Frankly I find that odd since the script is actually so challenging and complicated (the screenwriter Stephen Gaghan went on to write and direct the almost as gripping Syriana). Though the Michael Douglas section of the film with his daughter may feel a little trite—the one section that the British version got better—the other two sections are utterly captivating. If Traffic isn’t as important as Soderbergh might have hoped for it to be at least it’s incredibly well crafted, well acted, and totally entertaining. Soderbergh’s ability and willingness to combine scope of ambition with solid story telling makes him a unique filmmaker, both an artist and a populist andTraffic may be the purest example of that.

Traffic examines the effect of drugs as politics, business, and lifestyle. Acting as his own director of photography, Steven Soderbergh employs an innovative, color-coded cinematic treatment to distinguish the interwoven stories of a newly appointed drug czar and his family, a West Coast kingpin's wife, a key informant, and cops on both sides of the U.S./ Mexican border. Rarely has a film so energetic and suspenseful presented a more complex and nuanced view of an issue of such international importance. Instantly recognized as a classic, Traffic appeared on more than 200 critics' ten-best-lists, and earned 5 Academy Award® nominations.