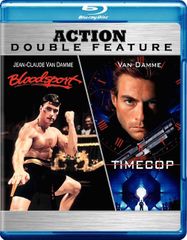 The world's martial arts championship isn't a sport: it's a war when Van Damme enters the arena. Heroic, handsome Jean-Claude Van Damme makes his screen debut in Bloodsport, the stirring brawlfest about the first Westerner ever to win the Kumite, Hong Kong's fierce, single-elimination, full-contact fighting competition. The future could be history in the powerful sci-fi adventure Timecop, as a dangerous, time-traveling politico (Ron Silver) sets out to change the past so he can pave his career path to the White House. But Time Enment Commission cop Van Damme is on his trail. Where he goes, searing action and soaring thrills follow.