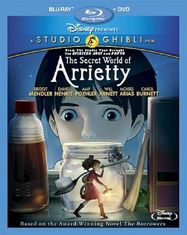 Discover The Secret World Of Arrietty where imagination comes to life! The studio that brought you Ponyo and the Academy Award®-winning Spirited Away (2002, Best Animated Feature) once again delivers a heartwarming tale of friendship and courage in beautiful animation - brilliantly presented through the magic of Blu-ray!

In a secret world hidden beneath the floorboards, little people called Borrowers live quietly among us. But when tenacious and tiny Arrietty is discovered by Shawn, a human boy, their secret and forbidden friendship blossoms into an extraordinary adventure.

Featuring the voices of Disney Channel's Bridgit Mendler and David Henrie and comedic all-stars Will Arnett, Amy Poehler and Carol Burnett, and based on the award-winning novel The Borrowers - The Secret World Of Arrietty will delight families of all sizes!