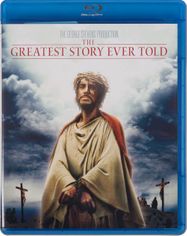 "A magnificent films" (New York Daily News) This glorious epic is an inspiring, grand scale recreation of the life of Jesus of Nazareth, from His humble birth and teachings to His crucifixion and ultimate Resurrection. Lavishly produced at a cost of $20 million - an enormous amount for the time - and honored with five 1965 Academy Award® nominations, this exceptional motion picture is exquisitely beautiful. Now fully restored to its original theatrical brilliance with intermission and overture, it is truly The Greatest Story Ever Told.