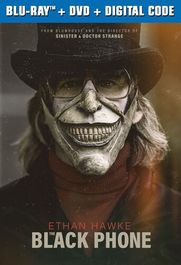 The Denver suburbs of the late '70s were plagued by a series of chil#ToComed abductions-and bullied tween Finney Shaw (Mason Thames) wound up a mark for the sociopath (Ethan Hawke) the local cops dubbed "the Grabber." Locked in his abductor's basement, Finney had just one uncanny lifeline to survival... a broken rotary phone that gave him contact with the Grabber's prior victims. Scott Derrickson's chilling take on the Joe Hill short story co-stars Jeremy Davies, James Ransone. 102 min. Widescreen; Soundtrack: English.