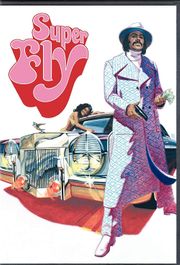 Released in 1972, Gordon Park’s Superfly immediately became a classic of the “blaxploitation” genre. Sporting the most stylish pimp threads of the early seventies, Ron O’ Neal plays “Priest” — a smooth talking, high rolling, cocaine dealer with a steely gaze and a firm backhand.

As the story opens, Priest finds himself in a bit of a mid-life crisis. Realizing that his days in the business are numbered and that if he wants to make it off the streets alive, he needs to cash in with one big final score of the white. The problem is, the police want him in prison or dead, and the mafia have no intention of letting their top earner enjoy an early retirement.

Ron O’ Neal is fascinating to watch in the lead role as he snorts blow off a crucifix dangling from his neck or threatens an underling that he will put his wife out on “whore row” if he comes up short on money owed. In a genre filled with former athletes as leading men, O’ Neal’s stage background sets his performance apart with its quiet and underlying fury.

The film captures a lot of the thematic elements found widely in the blaxploitation genre-- corruption of the white establishment, the abuse of power (especially among “honky pigs”), and the racial-economic divide in post-civil rights America. Although it captures the same visceral sights and sounds of urban society, like its predecessor, Melvin Van Peebles’s Sweet Sweetback’s Baadasssss Song (1971), Superfly comes across as more polished, focused and acutely directed.

What is most fascinating, and sets Superfly apart from many other blaxploitation movies, is the brilliant use of juxtaposition through music. On one hand, the film seemingly glorifies the drug peddling pimp as a hero in an unjust world, where “the man” holds everyone else down. But while making no apologies for the character of Priest, or his choice of livelihood, the soundtrack written and performed by Curtis Mayfield, counters the plot’s desperation with notions of love, freedom, equality, revolution, and an overwhelming sense of hope.

Never a dude like this one! He's got a plan to stick it to The Man!Charismatic, big-time Harlem cocaine dealer Youngblood Priest (RonO'Neal) drives expensive cars, keeps a downtown white woman, and plansone last big score to escape his life of violence.But when corrupt cops working for the Mob learn of his plan, they try tomake Priest a partner rather than arrest him. Now, can Priest outwit thestreet, the mob and the cops to win his freedom?