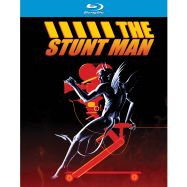 Not to be confused with the awful swell of stunt man flicks that arose in the late '70s and early '80s (Hooper, Stunts, Stunt Rock, etc), nope, Richard Rush's The Stunt Man is a genre all itself. It's a playful film about the magic of movie making, but its depiction of a film set is closer to the episode of The Flintstones when Fred becomes Stony Curtis's stand-in, then, say, Francois Truffaut's on-set Day For Night. Like a Christopher Nolan film, it's a puzzle in a box, but unlike Inception the characters never stop to explain it to you. What's real and what's make believe is up to the viewer's imagination, like film itself.

Vietnam vet Cameron (Steve Railsback) is on the run from the cops, stumbles onto a film set, and may or may not be responsible for the death of the movie's top stunt man. The film's egomaniacal director, Eli Cross (Peter O'Toole), takes the fugitive under his wing, agreeing to hide him out but Cross will have to replace him as the film's stunt man. While shooting a ridiculous looking WWI flick at San Diego’s Hotel del Coronado (the location of Some Like It Hot as well) Cameron's view of reality becomes more blurred (as does the audience's). Cross puts him in more and more dangerous situations (just like that Flintstones episode). Is Cross trying to kill him? Did Cross have Burt, the former stunt man, killed? Besides stepping into Burt's stunt shoes, Cameron also takes up with his girlfriend, Nina (Barbara Hershey), the film's leading lady. And again, a sexual relationship with a self-centered actress can also blur the lines of reality, maybe even more powerfully.

Another mystery the film creates is that of director Richard Rush's career. What ever became of him? The Stunt Man was Rush's long in development follow-up to two little offbeat '70s gems, Getting Straight and Freebie And The Bean. The Stunt Man may not have burned up the box office but it was released to massive critical acclaim. You would think a journeyman director like Rush would have finally been in a situation to call his own shots (think of B-Movie hack Curtis Hanson finally getting to go studio highbrow after the acclaim for LA Confidential). What did Rush do? Fourteen years later he made the forgettable Bruce Willis thriller Color Of Night, that's it (though he is a credited screenwriter on the Mel Gibson yawner Air America). What a loss for audiences. Rush was proving to be a real original. Perhaps he will pull a Terrence Malick and comeback with a spat of great work, out of the blue,  some day.

On the other hand, Peter O'Toole took full advantage of his Stunt Man good will. Following it up with My Favorite Year, after years of flops, O'Toole reestablished himself as a leading, eccentric, character actor (and received Oscar nominations for both films). Eli Cross is almost a spoof of his most famous role. Like the poet soldier Lawrence Of Arabia with his God complex, Cross sees himself as a world shaper and a people creator, he’s a manipulative son-of-a-bitch. Lawrence had a giant Arab army at his feet, Cross just a film crew. Which do you think an American audience will find more powerful?

Throughout her five-decade career Barbara Hershey always seems to wear her acting on her sleeve (see her chew down the walls in Black Swan). So she's perfectly cast as an actress who always seems to be overacting in her real life. Hot off playing Charles Manson in the TV-movie Helter Skelter, the overly intense Steve Railsback replaced (the never intense) Ryan O'Neal, and The Stunt Man would prove to be the apex of his career. As Cameron, Railsback is dialed in to full sneer in a brooding, Eric Roberts way. And like Roberts, Railsback is one strange actor. It's no wonder his career has been mostly relegated to playing psychos in straight-to-video junk and guest appearances on TV shows (though the nudity-filled vampire/zombie sci-fi hybrid Lifeforce is a guilty pleasure of mine).

Also lending to The Stunt Man's film magic is Dominic Frontiere's lively playful score. He was mostly a TV composer, but he nails it here and the music really helps lend to the film's perfectly mixed-up tones (mixed up, to mix the viewer up). At the end of the story Cameron argues with Cross saying, "you look at me like a movie, but I'm not, I'm real." These are people who don't want to live in reality; they are more comfortable on a film set in make-believe land. The Stunt Man is a movie about the magic, but more importantly the artists who believe in their own magic. It’s a wacky, crazy action film with lots of movie tricks up its sleeve. It's Hooper meets 8 1/2. Yes, that's what The Stunt Man is, it's a '70s Burt Reynolds flick directed by Fellini!