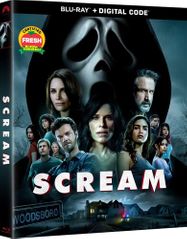 In the '90s, the burb of Woodsboro was murderously menaced by the shrouded slasher dubbed Ghostface-and now, someone has claimed the mantle and is continuing the body count. A new generation of pop culture-savvy teens struggles to suss out the killer's identity before they're picked off in this effective and winking "requel" for the meta mayhem franchise. Melissa Barrera, Jenny Ortega, Jack Quaid co-star with legacy performers including Neve Campbell, Courteney Cox, and David Arquette. 114 min. Widescreen; Soundtrack: English.