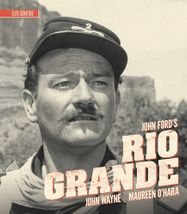 Rio Grande, the third and final installment in John Ford’s loosely-conceived Cavalry Trilogy (preceded by Fort Apache and She Wore A Yellow Ribbon) stars John Wayne as Lt. Col. John Kirby Yorke (the role he inhabited in Fort Apache) alongside Maureen O’Hara (in the first of five films she’d co-star in alongside Wayne) as his estranged wife, Kathleen, a woman set on keeping their son, Jefferson (Claude Jarman Jr., The Yearling), now under Yorke’s command, out of harm’s way. Filmed throughout Moab, Utah and the majestic Professor Valley – photographed in exquisite gradations of black and white by Stagecoach cinematographer Bert Glennon – Rio Grande offers nuanced observations on love, family, and honor, while firmly adhering to the western genre, showing Ford at his most measured and mature as a storyteller. Written by James Kevin McGuinness (Men of Boys Town) based on the Saturday Evening Post story by James Warner Bellah, Rio Grande features J. Carrol Naish and a supporting cast of familiar faces, many of them from the Ford stock company of actors including Harry Carey, Jr., Ben Johnson, Victor McLaglen, Chill Wills, and Grant Withers."