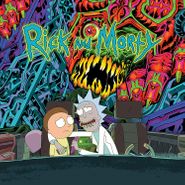 For Rick & Morty fans, the music in the show is an important part of the whole experience. With improvised and ridiculous lyrics, over the top score moments, the soundtrack on its own serves as a comedy album that parodies genres right and left. One such highlight is the Bowie-esque “Goodbye Moonmen” performed by Jemaine Clement from Flight of The Concords. Also included are the actual songs used in now web-famous moments of the show, such as Blonde Redhead's “For The Damaged Coda” from the episode, “Close Rick-counters of the Rick Kind.”