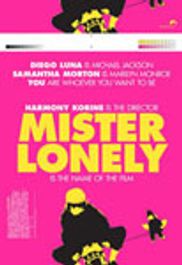 Have you ever wondered what it would be like to see Buckwheat from Our Gang wash the back of his holiness the Pope with a scrub brush in a stand-alone bathtub in the middle of the woods? Has the idea of witnessing Moe, Curly and Larry shoot a flock of diseased goats ever cross your mind? Or perhaps, getting a bird’s eye view of several nuns free falling through the atmosphere during an impromptu skydiving trip? If so, Mister Lonely is the film for you.

Mister Lonely is the story of a shy Michael Jackson impersonator (Diego Luna) living and dancing his way through the streets of Paris. While performing at a retirement home, Michael comes into contact with a Marilyn Monroe impersonator (Samantha Morton). The two have lunch at which point Marilyn invites Michael to accompany her to a commune inhabited by celebrity impersonators located in the Highlands of Scotland. At first, Michael is apprehensive. But the beautiful and very uncanny Monroe impersonator convinces him to join her. Michael gathers his things in a scene, which in my opinion, is the embodiment of the entire film. Never has a moment in a film where a character interacts with furniture ever make me feel the way in which this particular (and peculiar) scene did.

By boat, the two make their way to the secluded commune where we meet a bevy of familiar faces. Everyone from Shirley Temple (as Little Red riding Hood), Abraham Lincoln and James Dean to the Queen of England, Charlie Chaplin and Sammy Davis Jr. are on hand. The commune is self-reliant. They farm, build, live and exist in a world of make believe. They subsist in a community like no other (except for maybe a traveling circus) that requires no self-identity. They are in character all of the time. And now… they have their Michael.

With the above-mentioned set up, interspersed throughout the film, is a subplot that involves a group of Panamanian nuns who discover a secret that brings them closer to the truth that they’ve spent their lives in search of. The always amazing and legendary Werner Herzog (as Father Umbrillo) joins them on their journey for the truth.

Although the film has a plot and somewhat of a structure, Korine employs his usual style of nonlinear story telling. Unlike his first two feature films (Gummo and Julien Donkey Boy), Korine adds a bit of cohesiveness to his tenor and as a result, the audience is privy to a dream-like poetic body of work that should not be ignored. With an eye for the absurd, the beautiful and delicate thing that is life, his camera captures images and themes that demand attention.

After a long break from making strange yet cutting edge films due to a much-publicized bout with heroin addiction, Korine returns and re-discovers himself with a film about… well, self discovery. Glad to have you back, Harmony.