To attend this special event, purchase Omens on CD (Deluxe Ltd. Edition Exclusive Softpak CD with alternate cover art) or LP beginning October 7th in-store only at Amoeba Hollywood. Get a free poster with purchase - one per customer, while supplies last!

Lamb of God plays the YouTube Theater with Killswitch Engage on October 13th.

- Purchase Omens in-store at Amoeba Hollywood starting on 10/7 to receive a ticket admitting you to the signing event on October 13th.

-  CDs and LPs will be distributed in line on 10/13 (per label/artist so the sales qualify for record charts/Billboard).

- One signing ticket per person - limit 2 copies of Omens per person for signing.

- Signing limited to copies of Omens purchased at Amoeba only (no outside/additional items).

- No photos with band will be possible.

Across their career Lamb Of God grew from basement shows and grimy DIY venues to headline arenas. The New Wave of American Heavy Metal architects earned a reverence akin to musical forefathers (and road companions) Metallica, Slayer, and Megadeth.

"For millions of headbangers, Lamb Of God are simply the most important contemporary metal band in the world," Guitar World observed. Timeless songs like "Laid to Rest,""Redneck," "Walk with Me in Hell," and "Now You've Got Something to Die For" became anthems in the heavy metal songbook, with gargantuan vocals born from both righteous anger and devotion, and unrivaled riffs for the ages.

Even as D. Randall Blythe (vocals), Mark Morton (lead guitar), Willie Adler (guitar), John Campbell (bass), and Art Cruz (drums) enjoy one another's company and chemistry like never before, Omens is possibly the angriest Lamb Of God album yet. Densely muscular, soaked inunnerving spite, with a pessimistic eye toward inner struggles and global affairs alike, Omens is a furious entry in the catalog.

Most of the album was recorded live in the studio, including Blythe's vibrantly unhinged vocal attack. Morton and Adler's riffs threaten, challenge, and devastate. Cruz and Campbell'sunstoppable rhythms lurch and beckon. Having shined on 2020’sLamb Of God, Cruz injects even more nuance and personality into his playing across Omens’songs.

It's a potent, palpable energy Lamb Of God first tapped when they shoved heavy metal into the new millennium with New American Gospel (2000). As the Palaces Burn (2003) joined Rolling Stone'sTop 100 Greatest Metal Albums of All Time. Ashes of the Wake (2004) was the first Lamb Of God album certified gold by the RIAA, a feat once all but impossible for a contemporary extreme metal band.

Sacrament (2006), Revolver's Album of the Year, went gold as well. The raw and organic malice of Wrath (2009) began the band'senduring relationship with Wilbur. Both the diverse Resolution (2012) and the explosive VII: Sturm und Drang (2015) debuted in the Top 5 of the Billboard 200.

The hardcore fire at the heart of Lamb Of God still burns as hot as the 12-foot flames blazing the stages on their co-headlining trek with Megadeth, appropriately called "The Metal Tour of the Year." Even as the state of the world descends, the state of the union for Lamb Of God remains strong. 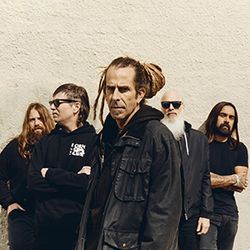 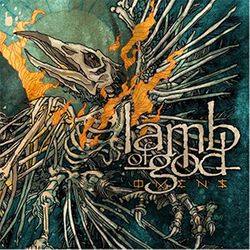