Amoeba Hollywood is having a listening party on Friday, August 26th at 12pm for the new Muse album, Will Of The People! We'll play the album start to finish, then pull winners for the prizes at the end. Will Of The People will be available on CD, LP and indie-exclusive color LP from Warner Records.

Come and listen to Will Of The People with us for your chance to win cool MUSE swag:

* Will Of The People Flag

- One raffle ticket per person will be given out. No purchase necessary to attend. Must be present to win/claim prize.

Gifts with purchase! Receive a Muse poster or bumper sticker with purchase of Will Of The People. In-store purchases only. While supplies last.

"This album was created in Los Angeles and London and is influenced by the increasing uncertainty and instability in the world. A pandemic, new wars in Europe, massive protests & riots, an attempted insurrection, Western democracy wavering, rising authoritarianism, wildfires and natural disasters and the destabilisation of the global order all informed Will Of The People. It has been a worrying and scary time for all of us as the Western empire and the natural world, which have cradled us for so long are genuinely threatened. This album is a personal navigation through those fears and preparation for what comes next." - Matt Bellamy 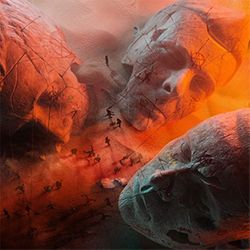