Join Amoeba SF in welcoming Thee Sacred Souls on Saturday, September 3rd at 3pm! The breakout San Diego soul trio will perform a live set and sign their self-titled debut album (out August 26th via Penrose/Daptone). Purchase Thee Sacred Souls to get into the signing line and meet the band.


You must wear a mask to enter the signing line at this event.

Also catch them at The Chapel on September 2nd & 3rd.

There’s something inevitable about the sound of Thee Sacred Souls, as if these ageless songs of love and loss have somehow always existed, as if drummer Alex Garcia, bassist Sal Samano, and singer Josh Lane have been playing together for a lifetime already. Produced by Bosco Mann (aka Daptone co-founder Gabriel Roth), the record is warm and textured, mixing the easygoing grace of sweet ’60s soul with the grit and groove of early ’70s R&B, and the performances are utterly intoxicating with Lane’s weightless vocals anchored by the rhythm section’s deep pocket and infectious chemistry. Hints of Chicano, Philly, Chicago, Memphis, and even Panama soul turn up in their music, and while it’s tempting to toss around labels like “retro” and “vintage” with a deliberately analog collection like this, there’s also something distinctly modern about the band that defies easy categorization, a rawness and a sincerity that transcends time and place.

It was that shared love and respect for the foundations of soul that brought the band together in the first place. Launched in 2019, the group began with Garcia and Samano, who bonded over their similar experiences growing up in southern California and a mutual affinity for record collecting. While Samano didn’t pick up the bass until he’d already graduated from high school, Garcia had spent much of his teenage years obsessing over guitar and drums, and teaching himself how to record. The pair’s mix of technical know-how and innate curiosity proved to be an ideal match. All they needed was a singer.

Joining a group like Thee Sacred Souls wasn’t an obvious move for Lane, though. A Sacramento native, he’d fallen in love with music through the church and studied classical voice in college, where he sang everything from French arias to Italian opera. When he moved to San Diego in 2017, he planned on becoming a solo artist, and his ambitions skewed more toward dreampop and chillwave than the old school soul sounds Garcia and Samano were cooking up.

Performing live as a seven-piece (the core trio plus guitar, keys, and two backup vocalists), the band generated a local buzz almost immediately, which put them on Mann’s radar and led them into his Riverside, California studio. At the time, Mann was planning to launch a new Daptone imprint named Penrose Records, and Thee Sacred Souls were an obvious fit for the label’s inaugural release.

The band more than delivers with Thee Sacred Souls, which opens with the mesmerizing “Can I Call You Rose?” With lyrics penned on the spot by Lane during his first rehearsal with the group, the track is a silky slice of pure romance and an ideal entry point into the group’s timeless sound. Like much of the album, it’s a bittersweet meditation on matters of the heart and the primacy of love, one fueled by lush horns, velvety vocals, and an impossibly smooth rhythm section. The unhurried “Lady Love” tips its cap to the South Side of Chicago as it reckons with forgiveness and second chances, while the doo-wop tinged “It’s Overflowing” draws on both classic Chicano soul and Jamaican rocksteady music in its pledges of devotion, and the nakedly sensual “Future Lover” flips the band’s lineup on its head as it revels in the highs of infatuation.

The album’s vocals — both Lane’s beguiling leads and the collection’s airy female backups — serve as the glue that often binds these tracks together, imbuing the hypnotic arrangements with an undeniable sense of emotional urgency. The restless “Weak For Your Love” highlights Lane’s dazzling falsetto; the charming “Easier Said Than Done” complements his laidback delivery with a wordless counter melody; and the lilting “Trade Of Hearts”—a duet with vocalist Jensine Benitez—even brings Garcia and Samano in for call-and-response lines. But perhaps it’s the bittersweet “Sorrow For Tomorrow” that best showcases the breadth of Lane’s range as he shifts effortlessly between mellifluous vocal runs and semi-spoken passages all about loss and healing, growth and forgiveness, longing and regret.

Ultimately, that’s what Thee Sacred Souls is all about: not just accepting our emotions, but embracing them as a beautiful and fundamental piece of the human experience. It can be difficult, no doubt about it, but as with everything else they do, Thee Sacred Souls make it look easy. 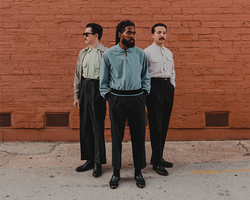 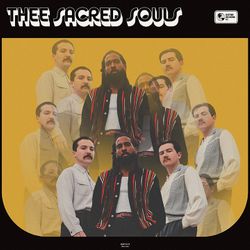