Amoeba SF presents a signing with the singer, actress, and director Hayley Kiyoko on Monday, August 1st at 4pm! You may purchase Kiyoko's new album, Panorama (Atlantic Records), starting this Friday, July 29th, in-store at Amoeba SF to get a wristband for the signing line, and pick up the album at our registers on the day of the event.

Quantities are limited. No phone orders and no holds. One album per customer. Outside items will not be allowed in the signing line.

A glow surrounds Hayley Kiyoko. Like an everlasting sunset or a solar eclipse, it’s the kind of light you can’t turn away from. She shines because she’s been through it. She’s weathered life’s insanity, embraced her full potential, and poured it all into her art without apology. Rather than hold back, she aims higher than heaven itself. She had a vision for what pop music could be — glorious, seductive, thoughtful, tender, redemptive, and rapturous all at once — and she made it a reality projected widescreen in three dimensions of sound, sight, and spirit. Through the prism of Hayley’s distinct creativity comes her second full-length album, Panorama.

In 2018, Hayley was at a high point. Following the success of her gold-certified anthem “Girls Like Girls,” Hayley’s landmark debut album, Expectations, reacted with tastemakers and a legion of fans. Known for portraying powerful queer narratives in all her self-directed music videos, Hayley also launched her own production company, Rich Youth, to dive deeper into the world of TV and film. She also broke ground with the introduction of her very own gender-inclusive fragrance, Hue, which has been nominated for the “Universal Prestige Fragrance Of The Year" at the annual Fragrance Foundation Awards. With all this success, though, Hayley looked inward and found a need to transform.

Hayley wrote the bulk of Panorama inspired by the natural fantasy surroundings where she lived in Topanga Canyon. She states, “Panorama’s world is inspired by the sky we see after a wildfire. The setting feels like being on Mars, playing off the theme of beauty found through destruction.” The album cover captures that feeling when the rainbow hits and gives us that hopeful feeling.

This time she worked alongside frequent collaborators Pat Morissey and Kill Dave, eventually bringing on executive producer Danja (Justin Timberlake, Britney Spears), who has become a trusted collaborator and kindred creative spirit. It began with questions. She reveals, “How far can I push past my own psychological boundaries? What is my truth and what is just a facade?”

Panorama unspools her journey in technicolor, inviting everyone along for the ride. 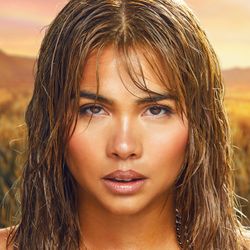