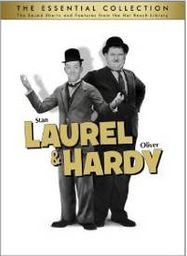 Stan Laurel and Oliver Hardy are widely acknowledged to be the most critically acclaimed comedy team of all time. Their films have been enjoyed for generations and exhibit a comedic style that not only defined an era, but created a legacy that is still celebrated today. Transferred for the first time with high definition and digitally restored, this set contains such favorites as Helpmates, Hog Wild, Another Fine Mess, Sons of the Desert, Way Out West, and the Academy Award® winning film The Music Box. Packed with entertaining bonus features, the collection includes brand new interviews with comedy legends Dick Van Dyke, Jerry Lewis and Tim Conway among others; insightful commentaries by classic film experts and historians; additional films starring the duo and original trailers. Laurel & Hardy: The Essential Collection showcases some of the most cherished and hilarious films in cinema history and is a must-have for comedy fans and collectors everywhere.