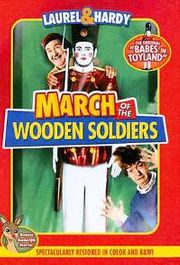 There’s a strange history of strange little holiday/family/fantasy films where the concepts were so "out there" you have to wonder, what were they thinking? From Santa Claus Conquers The Martians to that Michael Keaton reincarnated as a snowman flick, Jack Frost, there's a long list of these oddities. Perhaps one of the first and best is the bizarre Laurel & Hardy vehicle March of the Wooden Soldiers (originally it had the same title as Victor Herbert's 1903 operetta it's kinda-sorta based on, Babes in Toyland). For decades this has had perennial holiday showings on television (with different versions, all with different lengths) so now it's probably one of the best known Laurel & Hardy feature films.

The plot goes something like this... Living in a Shrek-like Mother Goose all-star fantasy town called Toyland, Laurel & Hardy play two men who share a bed named Stannie Dum and Ollie Dee. Their neighbors include the creepy looking Cat (with the fiddle) and the Three Little Pigs and an even more disturbing looking version of Mickey Mouse (played by a monkey in a costume). Stan and Ollie live with Widow Peep (Florence Roberts) and her daughter Little Bo (Charlotte Henry). Unfortunately, even in Toyland reality can set in. Peep is going to loose her pad - the mortgage is owned by the vile Silas Barnaby (one of film history's great villains). Little Bo has a relationship brewing with Tom-Tom, The Piper's Son, but Barnaby will forget the back money owed him if she will do the unimaginable - marry him. Meanwhile, hoping to score the cash from their boss, the Toymaker, Stan and Ollie lose all hope of that when they piss off Santa Claus, messing up his order for wooden soldiers (he didn't want life size ones). Eventually, after numerous frame-ups and punishments, Barnaby is exposed as a criminal. Barnaby leads an attack on Toyland by the scary monsters who live on the outskirts of town, Bogeymen. Stan and Ollie fix their blunder by using their oversized wooden soldiers to fight off the Bogeymen.

Like Chitty Chitty Bang Bang this is a film that maybe unintentionally scared me as a small child. For a kiddie flick, this movie is not very kid-friendly (I like that). The Bogeymen are rather horrifying looking, even the creatures that are meant to be adorable (the pigs, etc) are hideous looking. At one point, the town puts Hardy in a cruel water dunk machine as punishment - it's clearly known today as water boarding.

But the most memorable of my childhood nightmares from this film were of the bad guy Barnaby. Very interesting, this Grinch-like creep was played by a 21-year old actor named Henry Brandon (aka Henry Kleinbach) who did the part in older-age make-up. He would repeat the role a few years later in Our Gang Follies Of 1938, where he famously makes Alfalfa croon, "I'm the barber of Seville" repeatedly. Of course, Our Gang and Laurel & Hardy were both products of the slapstick mastermind Hal Roach. But perhaps Brandon’s most famous role was Scar in The Searchers. He also was the long time companion of Judy Garland’s fourth husband, Mark Herron.

Unlike the Marx Brothers' (even better) masterpiece, A Night At The Opera, you don’t have to fast forward through the songs. A Night At The Opera was full of heavily crooned songs that went on too long and didn’t drive the plot. At least there are not as many musical numbers in March Of the Wooden Soldiers and what there are seem to help tell the story.

The monkey in the mouse costume is never actually referred to as Mickey Mouse, but it’s obvious that's who it’s meant to be. In 1934 was Disney’s Mouse icon enough to rank with Mother Goose’s best-known characters? Knowing now the power of the Walt Disney Company it's interesting to speculate on why Walt would lend the image to rival Roach (as well as the theme to the Three Pigs song). Disney would do their own version of Babes In Toyland in 1961 with Ray Bolger as Barnaby. I’ve never seen it but I can’t imagine it without Laurel & Hardy or their characters who carry this entire earlier version.

Though Laurel has a slight British accent, Laurel & Hardy made the transition from silents to talkies perfectly. As a showcase for their comic madness, March Of The Wooden Soldiers works, though maybe not as well as their acclaimed short, The Music Box, or their follow up features, Sons Of The Desert and Way Out West. What is fun about this team is the comedy is divided equally between them. Unlike Abbott & Costello, Hardy, the "smart one," is the victim of the mishaps just as much, if not more than the dumb one. Stan Laurel is a facial physical comedy great; you can see elements in his expressions ranging from Buster Keaton to Jim Carrey. But on closer inspection it’s often Oliver Hardy’s overweight befuddlement that drives the comedy to its punch line. Like The Office’s Ricky Gervais or sometimes Homer Simpson, Hardy’s character is often just in search of dignity in a world that rarely gives it out unearned.

As far as required holiday viewing goes March Of The Wooden Soldiers may not be on a par with How The Grinch Stole Christmas or even It’s A Wonderful Life or A Christmas Story. Other than having a Santa Claus character it may better belong on a Halloween "must watch" list. I’m not even sure if in today’s world of hundreds of cable channels if March Of the Wooden Soldiers is still considered required holiday viewing. However for fans of Laurel & Hardy or fans of surrealism in comedy or mismatched genres or for Henry Brandon completests or for people who want to see one of the oddest but still delightful holiday films ever, March Of The Wooden Soldiers is beyond essential.

Imagine an enchanted fantasy world of timeless characters and magical moments where nothing goes right for the clumsy toymakers, Stannie Dum and Ollie Dee. When notorious scoundrel Barnaby demands to marry the beautiful Little Bo Peep, guess who secretly emerges as the bride. Based on the original Babes In Toyland, this movie is a dazzling spectacle of 6-foot wooden soldiers, Mother Goose characters and the beloved team of Laurel and Hardy.