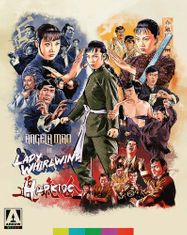 When director Huang Feng (The Shaolin Plot) jumped ship from Shaw Brothers to their upstart rivals Golden Harvest, he swiftly launched the career of a Taiwanese ingenue barely out of Beijing opera school named Angela Mao, who despite her fresh-faced femininity became one of Hong Kong's toughest action icons of the 1970s. Lady Whirlwind, directed by Huang in 1972, sees Mao dead set on avenging the death of her sister, only to find herself fighting a common enemy alongside the man she wants revenge on. Hapkido, made the same year, sees her once more pitted against a gang of Japanese thugs, alongside fellow soon-to-be kung fu legends Sammo Hung (Knockabout) and Carter Wong (Big Trouble in Little China) as disciples of the titular Korean fighting style, studying under real-life hapkido grandmasters Ji Han-jae (Game of Death) and Hwang In-shik (The Way of the Dragon). Originally released in the US as Deep Thrust and Lady Kung Fu respectively, these two restored martial arts classics show Mao at her mightiest - every bit as formidable as the great Bruce Lee, whose sister she played in Enter the Dragon the following year.