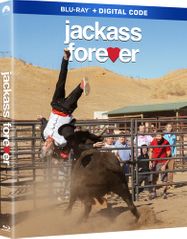 These guys aren't spring chickens anymore, and you'd think at their ages they'd know better. But you'll be glad they don't as veteran Jackasses such as Johnny Knoxville, Steve-O, Wee Man, and Chris Pontius are joined by a new crop of crazies for another round of insane and ill-conceived stunts. There's an encounter with a vulture, a re-creation of the myth of Icarus, a delicate body part turned into a beehive, the appropriately named Vomitron, and more. 96 min. Widescreen; Soundtracks: English DTS HD 5.1 Master Audio, DVS, French Dolby Digital 5.1, Spanish Dolby Digital 5.1; Subtitles: English (SDH), French, Spanish; bonus footage.