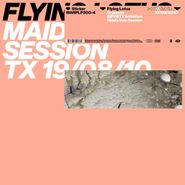 In 2010, Flying Lotus played a live set at the BBC Maida Vale Studios which featured his cousin Ravi Coltrane, singer Andreya Triana, and bass lord/jazz-funk genius Thundercat, among others. Contained in this Maida Vale Session are some of the most organic and traditional jazzy sounds you’re liable to hear from the producer, who is best known for his deft manipulation of electronics and recorded sound. That’s not to say the music here is by any means conventional; the result is plenty spacy and deeply hypnotic. Warp records presents the 4 song set with its first ever vinyl release, including the never-before-heard “Golden Axe.”