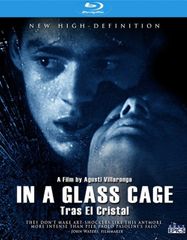 Klaus (Gnter Meisner of The Boys of Brazil) is an ex-Nazi doctor whose war-time post in a concentration camp enabled him to commit the most appalling sex crimes against boys. After the war, living incognito in Spain, he again gives in to his depraved desires, until shame and despair drive him to an unsuccessful suicide attempt. . . Now confined to his room and kept alive on an iron lung, he is ministered to by his resentful wife Griselda (Maris Paredes of All About My Mother) and her daughter Reno (Gisela Echevarina). Into this environment come Angelo (David Sust), a strange, handsome young man who offers his services as a nurse. Against Griselda's judgment, Klaus insists that the visitor be allowed to take the post. A perverse relationship develops between Angelo and Klaus, becoming ever more macabre as Angelo reveals he has found diaries detailing his employer's war-time activities. Words turn to deeds, Klaus's shame turns once again to desire, and a new spate of child killings begin. . .