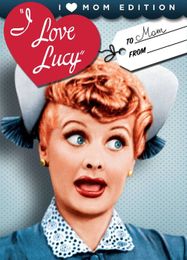 Lucy needs to tell Ricky she's pregnant, but after several failed attempts, a desperate Lucy realizes that she's faced with a choice: either tell him soon or "wait and let the baby tell him." So she visits the club and slips the headwaiter a note for Ricky during his performance.

Lucy Goes To The Hospital

The baby is due any minute and to help calm Ricky's nerves, everyone smoothly rehearses the moment when Lucy will have to go to the hospital. She gets there all right, but then Ricky has to rush off to open his new show. When he gets a call in the middle of his number, he hurries back to the hospital, still in heavy "voodoo" makeup, to see his new baby.

Little Ricky's crying bothers Mrs. Trumbull upstairs, who threatens to move out. The landlord, Ethel, is undaunted and explains that her friendship with the Ricardos is more important than money. But Ethel's constant recounting of the story becomes tedious to Lucy, and a bitter battle erupts between the two friends.

Lucy can't bear to be separated from Little Ricky, but Ricky Sr. is adamant: their son must start nursery school. All goes well-until Little Ricky gets sick and "Nurse Lucy" decides to takes charge.