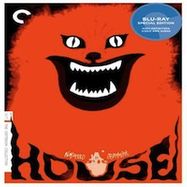 In Japanese with English subtitles.

Hausu is not for everyone, though, if you find anime films and series to be amusing and tasteful, you'll probably enjoy this quirky Japanese horror flick. The comparison to anime is based upon the shared characteristics that this film has with the genre. Aside from the dizzy colors and characters with zany nicknames, it also sports a team of girls who fight against a docile villain. It seems as though anime always has this creepy bad guy in the shadows who has a glossy stare and speaks like an intellectual zombie. Like anime, House also has no real plot; the meat and potatoes is in the action and the effects.

However, it would be unjust to say that this movie is simply a live-action anime. Besides being a unique horror film, it also comes off as a Japanese ghost story, except the phantom is symbolized by a mythical cat named Blanche, the reincarnation of some evil spirit. Nobuhiko