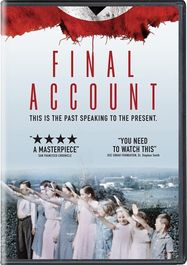 In 2008, upon the late-life discovery that his grandparents were Holocaust victims, filmmaker Luke Holland commenced interviews with hundreds of ordinary German citizens from the generation that lived through the Third Reich. The sobering observations and responses from onetime Hitler Youth participants, soldiers, and concentration camp functionaries regarding their society and what they witnessed make for an unforgettable experience. 94 min. Widescreen; Soundtrack: German; Subtitles: English. In German with English subtitles.