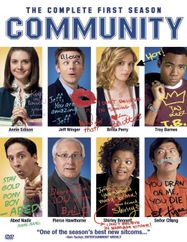 Smooth talking ex-lawyer Jeff Winger has got a lot to learn, and he's come to Greendale Community College to avoid every bit of it. Unfortunately for Jeff, he's not the only misfit to enroll here, and people in need have an odd way of finding each other. First, his fake study group becomes a real study group. Then, over the course of a strange year - from Mexican Halloween to the final 'Tranny Dance' - including bad trips, great debates, drunk dials, food fights, epic paintball battles and sinister chicken finger conspiracies - the group becomes a family, something Jeff never wanted, but clearly needs. Starring Joel McHale (TV's The Soup), Ken Jeong (The Hangover) and Emmy® Award winner Chevy Chase.