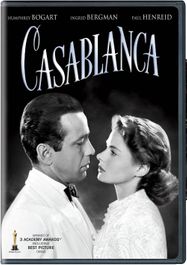 The romantic lovers' triangle between the impossible heroic Czech Resistance leader Victor Laszlo (Paul Henreid), his beautiful wife Ilsa (Ingrid Bergman) and her ex-lover, cynical American Rick Blaine (Humphrey Bogart), is still the same old story, but it's never looked better! Casablanca's new 4K resolution scan achieves the richest, most dynamic image possible, rendering the most romantic movie of all time the most beautiful it's ever been. So no matter how often you've seen the timeless classic that won 3 Academy Awards® including Best Picture, you'll want to play it again and again.