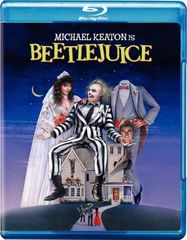 Somewhere between Pee-Wee's Big Adventure and Batman there is Tim Burton’s feature length sophomore effort, Beetlejuice. Upon a recent rewatch, I realized I’d forgotten how truly amazing, wildly inventive and original this phantasmagoric odd-ball comedy was! It’s quite frankly the purest Burton experience for me. It’s just silly how much of JUICE’s visual language oozes with Burtonisms! Add to that the sweet (as in cool) dialogue and characters created by co-authors Michael McDowell and Larry Wilson. I’m kinda in love with it lately!

THE DIRT ON THE DEAD…

Adam and Barbara Maitland just died. Played with great wholesomeness by Alec Baldwin (Adam) and Geena Davis (Barbara). So they die. But for a while they don’t know it. It becomes more apparent to them when they find a copy of the Handbook For The Recently Deceased laying around the house and the rude awakening that the Deetz’ are the new occupants and owners of their house! The Deetz family comprises of the artistically manic Delia (Catherine O’Hara), her uptight hubby Charles (Jeffrey Jones), and their ever morbidly morose daughter Lydia (Winona Ryder).

(P.S. Lydia’s alabaster skin and ink black wardrobe makes her quite the Goth Princess and must have sent all the Goth Babies’ hearts a twitter when this first hit the theaters.)

So now you're dead, you want to be left alone and you want the unwanted living house pests to get outta yer house. You can do it yourself or ask for help in the most unlikely of places or poltergeists… BEETLEJUICE, BEETLEJUICE, BEETLEJUICE! Michael Keaton gives an unruly original performance as "The Ghost With The Most" himself Beetlejuice. He’s dead, dirty, obnoxious, pervy, and insane. What more could you ask for?

THIS SIDE AND THE OTHER SIDE

The "living world" of Beetlejuice is fleshed out in a Mid-Westerny Small Country Town kind of way that becomes injected with late '80s modern zaniness (including the hair) once the Deetz’ move in. And the "after life" is rotten to the core with caricaturized corpses and loony bin architecture, the perfect slant to the straight and narrow of the Maitland's previously lived-in land. This lunatic landscape was brought to life by the wonderful work of production designer Bo Welch. His Burton collaborations also include Edward Scissorhands and Batman Returns. Which really just makes sense.

Scoring this sideshow is regular Burton cohort, Danny Elfman. The JUICE score has become a token work of Elfman’s for me. And apparently to others as well. I seem to remember the score being used all too regularly in the land of movie trailers at one point. Other Burton works include Pee-Wee's Big Adventure, Batman, Edward Scissorhands, Sleepy Hollow, and most recently Alice In Wonderland. NOTE: In related news there is a marvelous musical possession sequence involving shrimp cocktail and Harry Belafonte. Tre Bien!

Some of the most memorable scenes from Beetlejuice take place in a deli-style "take a number, wait your turn" waiting room on "the other side." It’s a perfect example of the utterly original flare of this world. It’s filled with a burnt-to-a-crisp burn victim still smoking a cigarette, a shrunken headed adventurer sitting next to a Witch Doctor, a green skinned receptionist akin to a Star Trek beauty, and a choking victim with a chicken bone caught in his throat, to describe a few. Besides the prosthetic-based characters there are a good deal of cartoonish stop-motion based characters spread throughout the landscape. Oh, the world of pre-CGI special effects!!! All this quirk is one of the greatest perks of this film.

NOTE: The word on the street is the "Chicken Bone" actor used to frequent the Buy Counter at Amoeba. Neato, no? Yes!

What's a Yuppie ghost couple (Geena Davis and Alec Baldwin) to do when their quaint New England home is overrun by trendy New Yorkers? Hire a freelance "bio-exorcist" to spooky the intruders, of course. As director Tim Burton, Michael "Keaton's Beetlejuice is one of the biggest, baddest wolves a ghost movie has ever unleashed, a polter-gas" (The Village Voice). Keaton's work in this and Clean And Sober won him 1988's National Society of Film Critics Best Actor Award. Winona Ryder, Catherine O'Hara, Jeffrey Jones and Sylvia Sidney share starring honors along with wondrous production design, Harry Belafonte soundtrack tunes and Oscar®-winning Best Makeup.