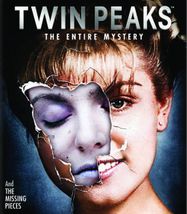 On stunning High Definition Blu-ray, Twin Peaks: The Entire Mystery is a comprehensive collection with every episode from the complete television series; both the U.S. and international versions of the series' Pilot; the North American Blu-ray debut of David Lynch's follow-up feature Twin Peaks: Fire Walk With Me; and nearly 90 minutes of deleted and alternate scenes from the film. The set also features newly transferred Log Lady introductions for each episode; picture upgrades to many shots in the TV series; a new featurette with series creator Lynch and the actors who portrayed the Palmer family which includes a mesmerizing return to the lives of their characters today; and hours of material never before released on Blu-ray, which dives into the fascinating story behind the celebrated pop culture classic.