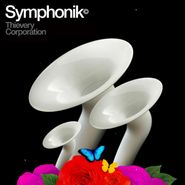 On May 15, 2017, Thievery Corporation’s Eric Hilton and Rob Garza held a performance at The John F. Kennedy Center for the Performing Arts, with the center’s own National Symphony Orchestra accompanying. The premise behind the show was a complete reimagining of some of Thievery Corporation’s past discography with full orchestral arrangements. Gradually, this idea went from a one-off performance to the impetus behind Symphonik. Culling 11 of the duo’s most popular and acclaimed songs, Symphonik features brand new recordings of each song, all augmented in a grand, ornate fashion courtesy of the Prague’s FILMharmonic Orchestra, and captured here on these lush recordings.