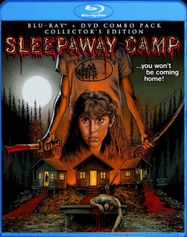 After a terrible boating accident killed her family, shy Angela Baker (Felissa Rose, Return To Sleepaway Camp) went to live with her eccentric Aunt Martha and her cousin Ricky.

This Summer, Martha decides to send them both to Camp Arawak, a place to enjoy the great outdoors. Shortly after their arrival, a series of bizarre and violent "accidents" begin to claim the lives of various campers. Has a dark secret returned from the camp's past...or will an unspeakable horror end the Summer season for all?

From its grisly makeup effects to the truly shocking and unforgettable climax, Sleepaway Camp is no ordinary slasher film...it's a cult classic!