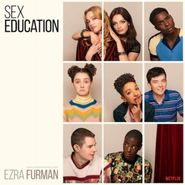 Ezra Furman's soundtrack to the Netflix original series Sex Education. The hit show follows the story of a teenage boy with a sex therapist mother who teams up with a high school classmate to set up an underground sex therapy clinic at school. Gathering the music from season 1 and season 2, this release features soundtrack exclusives alongside new recordings of some of Furman's best loved songs.