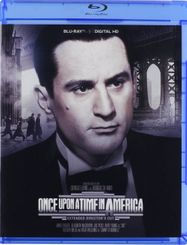 Sergio Leone's original vision comes to life in this fully restored Extended Director's Cut. Twenty-two minutes of never-before-seen footage have been returned to this chronicle of brutal and passionate underworld history, deepening the characters and enlarging the work of its astonishing cast. Robert De Niro and James Woods play lifelong pals whose rise as crime kingpins unravels in death and corruption. Tuesday Weld, Joe Pesci, Jennifer Connelly, Elizabeth McGovern, Treat Williams and Louise Fletcher (the latter three showcased in recovered scenes) also star. The newly added 22 minutes of extended scenes bring us closer to Leone's original vision of the film, but due to the limited availability of 35mm work prints, the new inserts could not be restored to the same quality as the rest of the film.