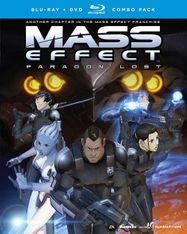 Fans of the ground-breaking Mass Effect franchise can't afford to miss this stunning motion picture experience born of an epic collaboration between legendary BioWare and the visionary Production I.G. (Ghost In The Shell, Kill Bill: Vol. 1).

Mass Effect: Paragon Lost, prequel to the best-selling Mass Effect 3, follows the early career of Alliance Marine, James Vega (Freddie Prinze Jr.) as he leads an elite Special Forces squad into battle against a mysterious alien threat known as the Collectors. Stationed at a colony in a remote star system, Vega and his troops must protect the colonists from the alien invaders bent on abducting humans for unknown purposes. Outmanned and outgunned, Vega must rally his squad to defend the colony at all costs - even if it means making the ultimate sacrifice.