Join Habibi at Amoeba SF on Sunday, March 1st at 2pm for a live set and signing of their new album, Anywhere But Here (out February 14th on Muddguts Records). Buy the album at Amoeba SF to get into the signing line. Also catch them at Bottom of the Hill for the Noise Pop festival on February 29th!

Habibi are venturing into the unknown. While their self-titled debut “combine[d] the Colgate-white glisten of sixties-girl-group pop with an uncensored edge" (The New Yorker), their sophomore album, Anywhere but Here, responds to a current global climate of unease, weaving colorful '60’s refrains with moodier, more expansive sonic textures. Recorded in the XL Recordings studios with producer Alex Epton, with the ability to experiment with instruments like the ney flute, the sitar, and tombak percussions that continue to tell the story of their Iranian history and heritage, the album culminates in Habibi’s most studied and mature record to date.

Their celebration of female friendship through trying times of doubt and uncertainty and trust in their process come through the deliberate structures, warm synchronization of guitars, and lyricisms that echo throughout. The songs that make up Anywhere but Here pose if not universal solutions, then honest perspectives on navigating a place that can feel more unfamiliar by the day, and finding the universal truths that ground us and challenge who we are. 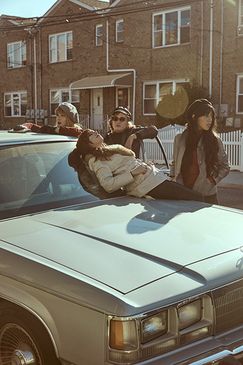 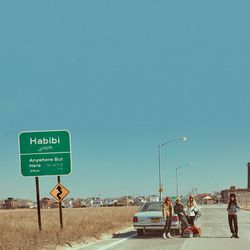