Cosandra Calloway was born and raised in Queens, NY but is a woman of the world. A former Miss Black Teen New York, she began her media career in college radio. It was during this time that she honed her hosting skills. She later set her sights on the west coast. She worked as executive assistant for Toni Braxton, served as General Manager at Red Eye Records, and later ventured out on her own as a red carpet hostess. Her radio show Callywood Live garnered over 4,000,000 listens with shows jam-packed with local and national news, celebrity gossip, interviews and more. She has rubbed shoulders with the likes of The Braxtons, Jermaine Jackson, Regina King, Vivica A. Fox, Queen Latifah, Holly Robinson-Peete, and scores more.

Ms. Calloway has led a diverse life, either by chance, circumstance, or opportunity. She has parlayed that into various business ventures throughout recent years. Among her current ventures in Los Angeles, she is the founder of Feed The Streets, a ministry that collects food from local businesses and feeds the homeless through the Los Angeles area. Currently, Ms. Calloway has rebooted her website with an all-new design, is gearing up to sell her 200+ own original paintings, is in the early stages of writing a fictionalized book of her life in the entertainment industry, and a few more trinkets down the line.

She is also a recipient of the 2017 Multicultural Motion Picture Association's Ladies In Red Diamond Rose Awards for Radio Personality Entertainment. 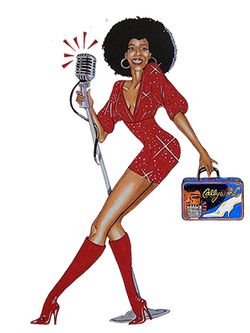