Syria-born, Los Angeles-based folk singer-songwriter Azniv Korkejian celebrates release day for her sophomore album, Bird Songs Of A Killjoy (out 6/21 on Spacebomb Records), with a live show and signing at Amoeba Hollywood.

When you listen to the love songs of LA-based Bedouine, you will be reminded of Karen Dalton’s world-wise voice or the breathy seduction of Minnie Riperton’s vocals, the easy cool of French ye-ye singers, and the poetry of Joan Baez. Her folk is nomadic, wandering across time and space, and on the likes of new song “Dizzy” meander into danceable jams. On first discovery you may ask whether they’re dated to 2019, or whether you’ve uncovered some forgotten classic. It makes sense that singer-songwriter Azniv Korkejian’s arrival – both musically and personally – on her second record has been influenced by her own wanderlust, displacement, and curiosity. “It’s called Bird Songs of a Killjoy, and I’m the killjoy,” she smirks over the phone from Sonoma, California. Azniv is based in LA, but is often travelling for the sake of musical inspiration. Her album title is something she’s still trying to decipher. “I’m figuring it out,” she says.

The twelve songs on Bird Songs of a Killjoy contain several references to birds, which initially panicked Azniv. “Oh no! What a cliché!” she recalls. Azniv is a scrupulous student of the greats, and often quotes from books by Leonard Cohen, and Joni Mitchell. In Mitchell’s biography, the songwriter talks about how she’d circle clichés in lyrics with a bold red pen and replace them. “That made me so self-conscious about how I go on and on about birds on this record,” she says. “But I have to step back and take a breath. These songs are just where I landed, and that’s OK.” When it comes to the “killjoy” of the title, Azniv describes the common perception of herself as a curmudgeon and a depressive. “Dare I say – a difficult women,” she continues, laughing. “I’m taking ownership of that stereotype, proudly.”

The music itself is the farthest from curmudgeonly or depressive as could be. It’s a soundtrack to Spring blossom, to warm air on skin, to the concept of possibility. Amazingly, despite the successes since her debut release, Bird Songs of a Killjoy rejects any pressures to be some kind of grand evolution from before. When her self-titled debut came out in the summer of 2017, Azniv was entirely unknown, and wasn’t necessarily looking to change that. The album she wrote in her free time while dealing with some emotional trauma and locking herself away in her house, was an exercise in diarizing, in expression without expectations. Some of the songs on this sophomore effort were from that same time period of fruitful creativity. She continued her creative partnership with Gus Seyffert (Beck, Norah Jones) who produced them in his studio.

Upon her debut’s arrival there was no anticipation for Azniv’s songs to reach an audience, never mind be lauded by Pitchfork, NPR and the FADER, a performance on late night television, and taking her to countries around the globe. “I don’t wanna call this a sequel,” she says of the follow-up LP. “It’s not necessarily a continuation but it’s not a departure either. There’s just so much there that I am still proud of that I didn’t want to put aside just because it came from the same time.” There was more effort, however, to concentrate on a cohesive beginning, middle and end. It was her biggest challenge, and it paid off. This is more than a mere collection of songs, and for that reason, includes a reprise of one song – “When You’re Gone” – and features re-occurring musical motifs and hidden tracks.

Additionally, the experience of building an audience made this a more intentional, perhaps nerve-wracking affair. “People have a standard to hold you to,” she explains. Recording while in the midst of touring was a whole new beast, too. “The stakes do feel higher,” she admits. “The fact there are stakes to begin with! When I recorded my first record I had no idea if it would come out, and I was OK with that. It was just thoughts I needed to put down – a personal project. There’s something so beautiful in that. With the second record that feels a little compromised. I try not to get too wrapped up in how people will receive it but, whether I want to or not, that’s the reality.”

Her music is often described as “nostalgic,” but that’s not her palette’s purpose for her. She works her songs on guitar, and does so as a means to understanding her feelings and compulsions. “I’m just trying to get to the bottom of the turmoil I’m feeling inside,” she says. The songs are so far from agony. They are tranquil and at peace, but therein provide the space for Azniv and her listeners to work through the difficulties. Like one of her biggest forebears and influences – Nick Drake – it’s the songs’ phrasings often, not their lyrics, that are depicting her innermost voices. Sometimes it’s important to remember that if a songwriter could say what they wanted to in words, they wouldn’t need melody at all. “Deep down we’re all capable of the same feelings,” she agrees. “Music without words discriminates even less to personal experiences, and allows us to have a feeling that’s universal, and that is something really special.”

Azniv’s experience of life is extraordinary. She was born in Aleppo, Syria, and swiftly moved to Saudi Arabia where she did most of her growing up until the age of ten. She went to an American school and lived in an ex pat community. “It was a crazy mish-mash,” she recalls. There was MTV in the house, so she knew about Nirvana. “But I was also just exposed to what my parents were putting on,” she says. Her dad was a singer but Azniv didn’t make the connection in familial passion there until she was much older. He’d play traditional Armenian and Arabic music at home. Her mother put her in piano lessons from the age of five and she hated it. “My music sounds so traditionally American and I’m not sure how that happened,” she offers, recalling that it wasn’t until her twenties that she discovered ’60s folk music and picked up a guitar.

“When people ask where I’m from, I really don’t know,” she continues. “It was a confused childhood.” They moved to America – Massachusetts first. Suddenly, Azniv fell into a depression and started rebelling. “It was my first experience of real change that you couldn’t undo,” she says. Despite being conditioned for a life in America, she found society’s structure alien. In Saudia Arabia, they’d lived in a liberal and gated compound. In the U.S., there were no boundaries. “I was riddled with anxiety about how far I could walk from my house. I could walk and walk and walk and get lost,” she says. “I became so conscious of not getting lost.”

Azniv, however, would become infatuated with the idea of getting lost. In her teenage years going to high school in Houston, Texas, she came across Fiona Apple and re-considered giving up her first instrument. “I became hip to her and thought – maybe I should start writing on piano!” She doesn’t write on piano now, only guitar. The first guitar she bought was on the day she was set to drive away from home to college. “New chapter, new guitar,” she remembers. She drove out to California for college, but soon came back to Houston. Impressionable, she followed a friend out to Kentucky, packing her stuff once more. She lived there and became more involved in the music scene, playing local holes in the wall, becoming wise to indie music and the older folk that would inform her own material. “That was a hugely influential time,” she says.

There was never a belief that music could be a career, though. Azniv was working customer service to pay the bills, and soon found a school in Savannah, Georgia, while on another whimsical trip there where they offered degrees in sound design. “It blew my mind – a perfect handshake of music and profession,” she says. It changed her trajectory. Once graduated, she moved to LA and began working in music and film for several years. She learned a great deal but realized she didn’t want to work in an office. She quit, went freelance, and during some dwindling work months started to flirt with music again. She wrote and wrote, and from this well of songs, she’s now arrived at more than two albums.

“After I released the first record and got a little press, all my friends said: I didn’t know you played music!” she laughs. Her gradual entry into the public conscience is similar to some of the artists she’s toured with since – the likes of Kevin Morby, Father John Misty and Michael Kiwanuka. “I do feel like I’m more in an artists’ community,” she says. Unlike other artists, however, Azniv is still stunned by the question of expectations for Bird Songs of a Killjoy. “All my work is on the front end,” she says. “All I can do is make sure I’m doing my best, putting my best foot forward, and honoring my emotional experience, but what it does in the end can’t matter as much.” For Bedouine, the songs have already served their healing purpose. Now it’s time for them to move others. 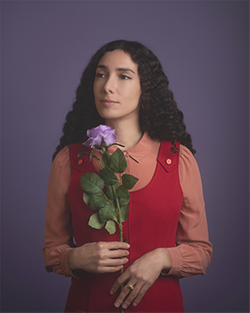 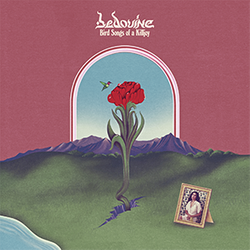