The song says, “we can’t go back again,” but The Ace Of Cups has, and in the process have crafted an album not only ageless, but without boundary or predictable cliché.

The Ace may not have been the first all-female rock and roll band, but they were the one that mattered within that bizarre wrinkle in time that constituted late 1960s San Francisco. Janis Joplin and Grace Slick were the reigning queens, but the musicians of The Ace Of Cups were no ladies-in-waiting. Converging from a diverse set of backgrounds in the Haight-Ashbury during the Summer of Love, these young women would constitute an independently-driven, uniquely-inspired organization, equally capable of feather-light poetry, funkier soul, and further-out freakery than any of their more celebrated male compatriots within the psychedelic ballrooms.

Indeed, the Ace shared the stage with many of the heavyweights of the era, like The Band and Youngbloods, and they could count legends like Michael Bloomfield and Buddy Miles amongst their admirers. No less a personage than Jimi Hendrix raved about them in print. Even with several personnel shuffles, the group stayed active in the Bay Area music scene for a full five years, but outside of contributions to albums by Quicksilver Messenger Service, Jefferson Airplane, and a handful of others, The Ace Of Cups never got to make a record of their own, despite the interest of several labels and an obvious hometown support.

Yet, though the music would dim, the sisterhood did not. The Ace Of Cups was too powerful a force in each member’s life to just disappear. Their songs lay buried in old scrapbooks, on unmarked home tape reels, and in the collective memories of those involved. A 2003 archival collection, It’s Bad For You But Buy It, won the Ace some long-overdue notoriety, and their decades-long friendship was renewed once more. The topic on everyone’s mind was some unfinished business. The Ace Of Cups needed to make the studio album that fate had previously denied, to breath life back into music that retained its validity and vitality on both an emotional and spiritual level.

There was a reunion of the original quintet for a Seva Foundation benefit in 2011. In attendance was George Wallace, president of High Moon Records, who had come west to talk to the Ace about the potential reissue of more old tapes. Instead, having witnessed the magic that sparked when the ladies sang and played together, he departed with a plan to bankroll an album project.

Within weeks, four of the original five Ace - Denise Kaufman, Mary Ellen Simpson, Diane Vitalich, and Mary Gannon Alfiler – had put their heads together and begun to witness years of restless creativity percolate from within. Fully putting his money where his mouth is, Wallace’s magnanimity has led to a wondrous event – the rebirth of a collective and prolific muse, brimful with the innocent enthusiasm that made the original Ace so compelling.

The inspired choice of biz veteran Dan Shea (Mariah Carey, Celine Dion) to handle the production laid a bold and unpredictable path for the women to follow. Shea studied the fuzzy, imprecise recordings of the vintage Ace, and chose to recast them in new but wholly appropriate light. Across three years of productive sessions at Marin County’s Laughing Tiger Studios, his skill, patience, and vision has taken the musicians in directions they may not have expected, but which have benefited their music immensely.

Shea recognized the pure folk, blues, and gospel moves that are the generational roots of the Ace, but he also chose to amplify the inherent pop sensibility in their songs, and encouraged both the thrilling energy of the garage band, and a delightful and wholly appropriate psychedelic sheen.

Most importantly, the producer has understood that the core essence of The Ace Of Cups is in fact the songwriting. Styles and formats may come and go, but a song is timeless, and the Ace had - and has - quality songs in abundance. Whether they are vintage tunes reinvented and reinvigorated, or more recent work that reflects their maturity and shared experience, everything exudes with The Ace Of Cups’ trademark, wide-eyed wonder at the powerful possibilities of communication through music.

This new album Ace Of Cups should really be sub-titled "Volume One," as the recording process brought forth a plethora of material from each of the participating quartet. Two sides of guitarist Mary Ellen Simpson - caring and protective, or unrequitedly passionate - can be heard on her songs "Mama’s Love" and "Pretty Boy." The soulful Diane Vitalich, the heartbeat of the Ace, expertly delivers the groove both instrumentally and vocally on cuts like "Circles" and the sassy "Stones."

Bass-playing Denise Kaufman likewise retains a twinkle of her wild-child Prankster past on upbeat gems like "Fantasy 1 & 4" and "Feel Good," whilst sharing wistful aplomb on "We Can’t Go Back Again." And last but not least, Mary Gannon Alfiler is spellbinding on the haunting "Macushla," while her anthemic pop-psych opus "Feel It In The Air" is but one of the many highlights upon Ace Of Cups.

The ladies also couldn’t help but bring in some of their old friends to participate in the joyous creativity. Jorma Kaukonen, Jack Casady, and Charlie Musselwhite are just three legends to lend an instrumental hand, while there are four veritable superstar guest vocalists – Bob Weir, Taj Mahal, Buffy Sainte-Marie, and Peter Coyote.

Despite this heavyweight line-up, Ace Of Cups belongs wholeheartedly to the four women who operate under that name. It’s a record that in essence was a half-century in the making, yet it comes across as fresh and vibrant as if we were hearing those same musicians back in their youthful reverie. And in the end, The Ace Of Cups can convey the joy of humanity’s greatest art form as simply and as eloquently as anyone ever has: Music – everything will be all right . . . 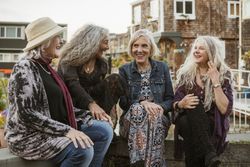 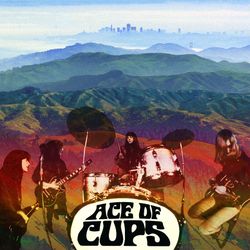