Amoeba SF is proud to welcome Jason Achilles to the stage with a special matinee performance and signing of his new DISCØ EP on Saturday, October 20th at 2pm!

Multi-instrumentalist and producer Jason Achilles tours as an experimental and instrumental two-piece rock duo with drummer Forrest Mitchell. The pair recently completed a month-long UK and European excursion and will be performing at Amoeba Music SF in support of the brand new 2018 DISCØ EP release and video single. Jason was recently described by the Sacramento Bee as an "atmospheric L.A. rocker and zen-like sonic architect" who "takes no territory off the table for exploration with his wanderlust instrumental meanderings."

In addition to financing and supporting the continued release of rock instrumental recordings, Jason composes and records his original orchestral works overseas (in Budapest and Prague), and is a contracted employee for NASA's Jet Propulsion Laboratory in Pasadena, working to develop audio recording on the next planned Mars rover mission in 2020/2021. 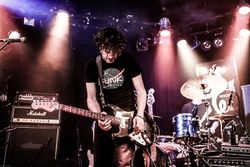