Purchase the Spring EP on April 5th in-store only at Amoeba to meet the band and get the album signed after the show.

- Show is free and all ages.

- Signing is limited and available on a first come, first serve basis with CD purchase only.

Wallows singers/guitarists Braeden Lemasters, Dylan Minnette, and drummer Cole Preston have been playing in groups together since they were 11, starting out at a San Fernando Valley music program, Join the Band. Nearly a decade later, the trio are about to release their major label debut on Atlantic Records, Spring, a collection of six new songs that wear their pop-rock hearts on their collective sleeves.  Inspired equally by their adopted love of classic rock (Beatles, Led Zeppelin, Stones), alt/indie faves (The Strokes, Arctic Monkeys, Vampire Weekend, Arcade Fire, Kings of Leon, St. Vincent, Alvvays) and their own idiosyncratic tastes (which range from Mac DeMarco, [Sandy] Alex G and The Garden to Frank Ocean, Steve Lacy and Tyler, The Creator), Wallows’ fresh new sound revitalizes rock music for a new generation.

“We don’t have any particular musical style,” says Warren, OH, native Braeden, who first met fellow Midwesterner Dylan (Evansville, IN) as child actors in Los Angeles, later adding Van Nuys, CA-born and raised Cole. “We incorporate whatever we happen to be listening to and are inspired by. It all depends on what the song requires.”

Produced by Grammy award-winning producer, engineer & mixer John Congleton – who has worked with everyone from St. Vincent to Modest Mouse, Amanda Palmer to Laurie Anderson and Brian Wilson to The War on Drugs – at L.A.’s famed Sunset Sound, Spring captures that eclecticism. The first single, “Pictures of Girls,” sports a post-punk/dance-floor fervor inspired by the Smiths, New Order and The Cure. “Ground” features a Louisiana swamp-riff-turned R&B vibe, while the Beatlesque “Let the Sun In” is embellished with Flamenco trumpets and Abbey Road flourishes alongside the bright, SoCal harmonies of “These Days.” “1980s Horror Film” was penned by Braeden as an homage to his favorite ‘80s scare flick, Halloween IV, setting the scene with its tongue-in-cheek, lyrical opening, “She was only 17/Oh, why are girls in songs always 17?”

“We want to continue being unpredictable with our sound, keep our fans guessing,” says Dylan. “We wanted this EP to sound like a progression.”

Wallows are an overnight sensation that took almost 10 years – and more than their requisite 10,000 hours – to connect with an audience. Working together as only longtime friends could, the group went through several iterations, with various degrees of success. A little over a year ago, the group – having not even decided on a new name – recorded four individual tracks with their good friend, North Dwarf Records’ Stefan Mac in his Lake Forest, CA, studio. The reaction to “Pleaser,” “Uncomfortable,” Pulling Leaves Off Trees” and “Sun Tan” was immediate – Zane Lowe debuted both “Sun Tan” and “Pulling Leaves Off Trees” on his Beats 1 Radio show; “Pleaser” picked up more than 5 million streams, landing at #2 on Spotify’s Global Viral 50 Chart and topping KROQ L.A.’s Locals Only playlist. Sold-out shows at L.A.’s The Roxy and Troubadour, San Francisco’s Slim’s and the Mercury Lounge in New York were followed by a headlining national tour that put them in the major labels’ crosshairs, ultimately signing their first recording contract with Atlantic Records.

“We’re taking this day by day,” confirms Cole about the band’s increased workload. “Given the nature of our schedules, it’s nice to know what we’ll be doing for the next 18 months. These past two months, we’ve totally evolved as a band – signing to a label, and  touring for the first time.  We’re entering adulthood.”

Indeed, Wallows are all about that tender period between the innocence of childhood and the onset of maturity, an area Dylan feels the band will continue to explore. In “Pictures of Girls,” the song’s main character doesn’t want to leave his suburban youth behind for the big city, longing for the girl who’s already moved on, ruefully admitting, “You should be down in Hollywood.”

There’s a yearning and optimism in Wallows’ music that brings back some of rock’s golden eras. And while both Dylan and Braeden have their respective acting careers, music has become their top priority.

Dylan emphasizes, “The one thing you can’t argue is how hard we’ve worked for so many years.  We could have given up at any point along the way.  We take our music very seriously.”

And if the term “wallows” is often followed by “self-pity,” that’s not the case with the band, whose name refers to the Hawaiian skate spot made famous by the 1987 boarding documentary, The Search for Animal Chin. Braeden, Cole and Dylan have the easy-going manner of best friends; that quality comes out clearly in music that produces earworms in a single listen, and live shows boasting the kind of camaraderie and warm feelings only a lifelong bond can produce. 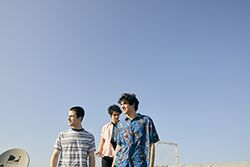 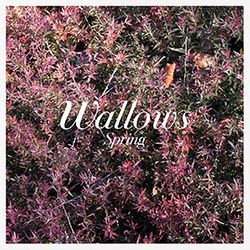