Amoeba and Converse Rubber Tracks are proud to present So Many Wizards! Join us for a live set and signing of their latest 7", Night Chills, at Amoeba Hollywood Thursday, January 29 at 6pm. Get a FREE split 7" of So Many Wizards & Tennis System at this extra-cool in-store performance, only while supplies last.


"The hazy-jangle quartet So Many Wizards have lately become staples of L.A.’s always-adventurous DIY scene."  - Stereogum

With a sound that Aquarium Drunkard describes as an “enigmatic blend of pop, rock, ballads, and zany nuggets," the hardworking dream pop group, So Many Wizards, have been consistently playing high-spirited and powerful live shows across Los Angeles and greater Southern California. Started originally by lead singer/guitarist  Nima Kazerouni in Long Beach, California, the current lineup includes Erik Felix on drums, Bassist Devin Ratliff, and Martin Tomemitsu on lead guitar. Their single “Inner City” earned airplay on BBC 1 leading to a UK tour as well as touring the US, and last year supporting No Age at the first annual KXLU Fest in Los Angeles. They have unquestionably become a staple of LA’s DIY music scene as all of their local shows are brimming with sweaty young fans crowd surfing and dancing along to every jangly dream punk song. Along with packing venues with their high-energy shows, So Many Wizards have released a handful of EPs, a debut album, two 7”s, and recently had their single “Lose Your Mind” featured on FOX’s New Girl. They will very shortly be releasing their Part Time Punks session EP via Lolipop Records, a split 7” via Converse Rubber Tracks and Amoeba Music, and their sophomore full-length album, Heavy Vision is slated to be released in 2015. 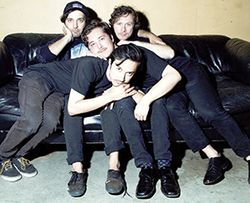 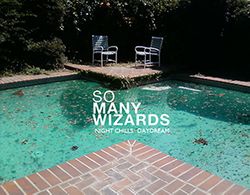