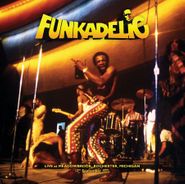 Contained here is a unique snapshot of Funkadelic’s live performance at the height of their powers. Recorded live at Meadowbrook, Rochester, Michigan on the 12th of September 1971, this is the only official in-concert recording from their early career.

The crystal clear recordings here (taken from the soundboard master tapes) provide you with an overdose of free-floating psychedelic black rock and spaced-out jams that can only be described as ‘Jimi Hendrix, James Brown & Sun Ra making a love-child live on stage’.

This release also includes extensive & exhaustive liner notes from the Grammy-award winning professor of ethnomusicology ‘Rob Bowman’ who goes over each track in detail and also wrote down quotes from Bernie Worrell & Billy Bass.