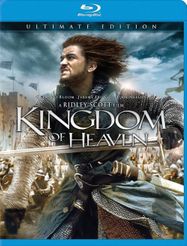 Commemorate the 10th Anniversary of visionary director Sir Ridley Scott's cinematic masterpiece with this 2-Disc Blu-ray Edition that includes all three versions of the film - the Director's Cut, Director's Cut Roadshow Version and Original Theatrical Version - all presented in high definition, plus over nine hours of in-depth special features, including a full-length documentary that takes you on the path from pre-production to release. A truly legendary cast leads this visually spectacular epic, including Orlando Bloom, Eva Green, Liam Neeson and Academy Award-Winner® Jeremy Irons. Bloom stars as Balian, a young blacksmith who has lost his family and his faith. But when his father (Neeson) reveals his destiny, Balian joins the heroic fight to protect his people from overwhelming forces, and rises to knighthood.