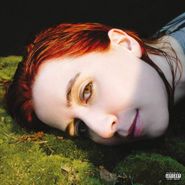 HiRUDiN, the fourth album from Austra (aka Katie Austra Stelmanis), is named after the peptide released by leeches that also happens to be the most potent anticoagulant in the world. It’s an unconventional but fitting name for this introspective album focused on the theme of toxic relationships and how to disentangle oneself from them. Austra boldly investigates clingy behavior patterns and how to break them, the importance of healing the self, letting go of harmful influences, and finding the power to rebuild through exploring innermost desires.