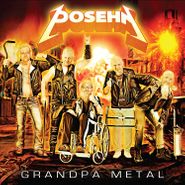 Sick of the self-serious wrath, destruction, and pillaging of contemporary metal? Then Brian Posehn has the comedy/metal album for you! Meet Grandpa Metal, the comic’s light-hearted, hard-rocking new metal album that spends equal time skewering and celebrating metal genres and tropes such as Viking metal, ‘80s party metal, black metal, the dark lord Satan, and totally-over-it, crusty elder scenesters. (Hence the album’s title.) Obviously, the whole thing’s in good fun…but it’s also just straight up good. And how could it not be with the all-star collaborators Posehn recruited for the thing? Expect raucous, ultra raw contributions from members of Steel Panther, Amon Amarth, Slayer, Soundgarden, Fall Out Boy, Slipknot, Exodus, Testament, Huntress, Anthrax, and Dethklok. Also along for the ride: the inimitable Weird Al. Prepare for loads of wild originals, plus covers of A-Ha’s “Take on Me” and Ylvis’ “The Fox (What Does the Fox Say).”