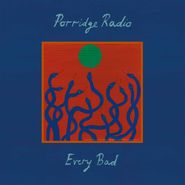 Porridge Radio were molded in Brighton’s DIY scene, creating a sound born of the ashes of storied English post-rock luminaries such as The Fall or The Raincoats. Over time that has incorporated ‘90s alt-rock elements, the singer/songwriter stylings of Cat Power and Elliott Smith, and even, as the band claims, Blink 182 (squint and you can almost see it). Their first release on “big indie” label Secretly Canadian, Every Bad is Porridge Radio’s blockbuster moment, and it certainly sounds the part. With the muffled, charmingly lo-fi production that characterized their earlier releases replaced by slick and muscular sheen courtesy of a professional recording, Porridge Radio’s songwriting prowess is thrown into stark relief. Every Bad seamlessly cycles through sounds and moods, showing the breadth of the band’s range. That includes the sing-a-long chorus that adorns the abrasive “Don’t Ask Me Twice,” the synth-kissed indie pop of “Give/Take,” and the almost Modest Mouse meets Arcade Fire-esque “Circling.” Most stunning of all, however, is the slow build of “Lilac,” which evolves from seasick post-punk ballad to scene-stealing catharsis, and is easily one of the best songs of the year so far.