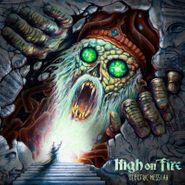 Amazingly, Matt Pike has managed to do this twice in his career. First gaining (a sort of very prolonged) success with the stoner-metal group and cult-sensation-turned-legitimate-metal-superstars Sleep, Pike has quietly been one of the most consistent metal musicians of the past few decades. High on Fire, his passion project since 1998, is the true reason why. Following the warm, fuzz-toned, and stoner-friendly production of the band’s earliest two albums, HoF hit their stride with 2005’s Blessed Black Wings by cranking up the treble, adding plenty more '80s thrash influence, and putting Pike’s gravelly voice up front. Since then, the producers may have changed (featuring such past heavy hitters as Steve Albini and Jack Endino) but the sound has not. Deftly incorporating elements from endlessly reliable genre icons like Slayer, Celtic Frost, and (especially) Motorhead, High on Fire might be the 21st century’s preeminent metal band, various trends and fetishes be damned. If you expected anything different from Electric Messiah, you’d be sadly mistaken. These nine songs keep their foot on the accelerator throughout, BPMs firmly in the 200s, with the occasional heavy-as-glaciers breakdown for dramatic effect. As for that Messiah of the title? That’d be Lemmy according to Pike himself, paying album-long homage to his oft-compared hero. That doesn’t mean HoF are living in anyone’s shadow, as they continue to pave their own way forward. Don’t be fooled by how effortless they make it seem; no one else can craft albums that sound quite like this. Here’s one more for ya. Enjoy it, heathens.