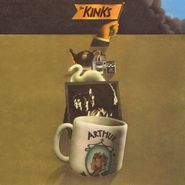 The hugely well-respected and historically important Kinks seventh studio album Arthur Or The Decline And Fall Of The British Empire has been newly remastered and reissued for its 50th anniversary. 'Rock musical' in style and one of the most effective concept albums in rock history, the album was constructed by Kinks' frontman Ray Davies as the soundtrack to a subsequently cancelled Granada Television play. This 2LP features newly remastered stereo versions of the original Arthur album from HD sources, and includes singles, BBC Mixes, and Dave Davies solo tracks.