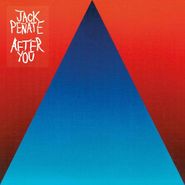 Ten years after English singer/songwriter Jack Peñate released his critically-acclaimed breakout album, Everything Is New, he returns with his first full-length follow-up, After You. Known for his soulful take on indie-pop with global textures in mind, Peñate has stood out for his incredible songwriting. After You sees Peñate fully confident and mature in his reputation as he moves from style to style, even edging towards the experimental as he ties in World music influences.